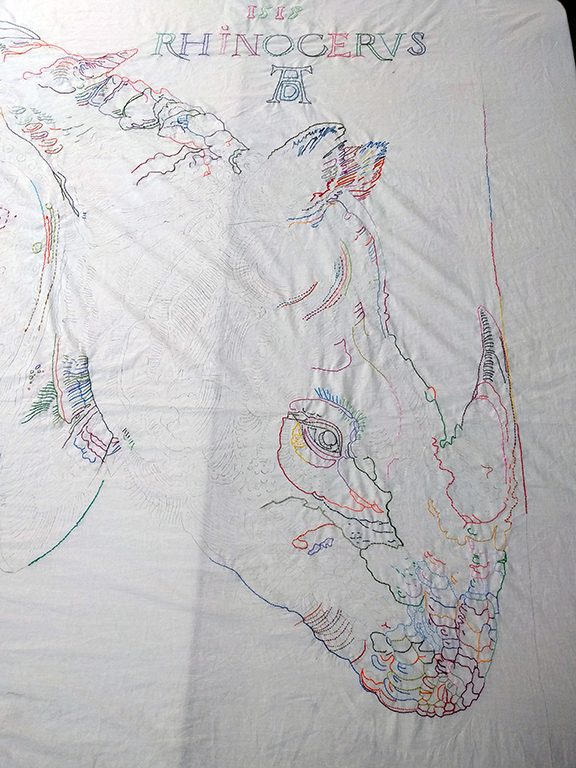 Posted at 15:54h in Red Butte Press, This Book is Now by crane 0 Comments
0 Likes
Share RHINOCEROS PROJECT: We (Anne Beck and Michelle Wilson) recently collaborated on a zine, “How the Rhinoceros,” which emerged from an ongoing collaboration, “The Rhinoceros Project.” “The Rhinoceros Project” is an ambitious and absurdist endeavor inspired by Albrecht Dürer’s print of the same name. Through a series of participatory sewing circles and papermaking happenings, we are translating Dürer’s Rhinoceros into a life-size watermark in handmade paper (a “papermaking happening” is the terminology we use for a social pedagogy-based event in which we invite the public to make paper with us, the results of which they get to keep—a sort of “make and take” event). Often we provide either a watermark or stencils and pulp paint so that the paper made by participants allows them to express their own individuality. Dürer based his image on a descriptive account, never having seen the Rhinoceros himself. In 2011, the Western Black Rhinoceros was declared extinct, and as of 2016, the Northern White Rhinoceros is down to only three remaining animals. Watermarks are a handmade paper technique in which paper fibers are thinner in certain areas than other parts of the paper; when the paper is backlit, an image appears. A watermark creates haunting imagery, literally produced by the absence of pulp. Our watermark will be a metaphor for this species’ disappearance, and evocative of the artwork’s history as printed matter—a work of paper where the print itself has vanished, leaving a ghostly image behind. In order to achieve this goal, in September 2016, we embarked on a series of participatory sewing circles, in which the public is invited to sit and sew with us. To date we’ve partnered with host organizations, including the San Francisco Center for the Book, Ramon’s Tailor, and the Kala Art Institute, as sites for building community and dialogue for the project. When complete, the watermark will be stretched on a frame, and paper pulp will be poured into the frame to create our Rhinoceros watermark in handmade paper. We aim to make a total of three, referencing the remaining three Northern White rhinoceri. Detail of the rhino Laying out the book

So we discovered—when you start embroidering a life-size rhinoceros, everyone wants to know why. We found ourselves struggling to encapsulate all the ideas that led to this project, so we decided to make a zine, something accessible that could illuminate the constellation of ideas, events, and philosophies of imperialism and colonialism that led to Albrecht Dürer’s print, its influence, and our project.

Dürer’s print was inspired by the 1515 gift of a Greater One-Horned Rhinoceros from an Indian sultan to the King of Portugal. A rhinoceros had not been seen in Europe since Roman times, and its arrival led to a reinvigoration of interest in the writings of antiquity, such as those of Pliny the Elder.

King Manuel I of Portugal, in order to ingratiate himself and win continued approval of his empire’s expansion in Asia, chose to re-gift the rhinoceros to Pope Leo X. However, on the voyage to Rome, the ship sank, and the rhinoceros, chained to the deck, went down with the ship. Dürer himself never laid eyes on the rhinoceros; his image was based on a sketch and a description.

Despite several inaccuracies, Dürer’s print became a sensation, and was widely regarded as an authoritative example. As we researched the history of this image, we were surprised to discover how it was adapted by others—it was featured on the doors to the Pisa Cathedral, it became part of the Medici coat of arms, and a sculpture based on it by Jean Goujon was placed at the base of an obelisk in Paris as part of the welcoming celebrations for the arrival of Henry II, the new king of France. The image had transcended its status as specimen into the realm of imperialism. Umberto Eco summarized this by saying that Dürer’s “scales and imbricated plates” became an essential means of representing a rhinoceros, even to those who might be familiar with accurate representations, because “they knew that only these conventionalized graphic signs could denote «rhinoceros» to the person interpreting the iconic sign.” As the various connections began to present themselves, we began to see them almost like constellations that move in relationship to one another. This web of ideas was the basis for the rhinoceros as constellation in the book. As we explored the multitude of connections to this artwork, it seemed logical to design the structure of the book to be a constellation map. The center spread of the book opens up, and is designed to be read from bottom to top, continuing on the spread that folds this center spread back into the book, and follows a timeline of 1515 to the current day.

The final page of the book is a spiral based on the golden rectangle and summarizes the interconnecting concepts in the map.

Prior to making this book, we, as The Rhinoceros Project, assembled the Rhinoceros Reading Room and Ephemera Collection, a library of various books and a growing syllabus of research that has informed this project and corresponding dialogue, through which we attempt to convey some of the broad range of ideas that had formed this project (see syllabus here). Topics included papermaking, printmaking, natural history, extinction, rhinoceros science, and social practice. A large part of The Rhinoceros Project is about engaging community in dialogue around this constellation of ideas. The book can travel easier than a library and life-size rhinoceros embroidery. Other interesting details about the book include the end sheets, which are a digital scan of one of our watermark experiments, showing the reader how the print is translated into embroidery. In addition, the handmade paper covers include trimmings from threads sewn during our sewing circles.

The zine is meant to be an in-process document and an explanation for why and how The Rhinoceros Project, showing all the interconnections and coalescing the ideas. It will serve as a basis for how this project continues and develops further. Michelle Wilson is a printmaker, papermaking, book, installation, and social practice artist. Her practice includes frequent collaborations with other artists, in particular her ongoing projects Book Bombs (with Mary Tasillo) and the Rhinoceros Project (with Anne Beck). Her work explores interconnections between environmental issues, colonialism, natural history, migration, and the loss of diversity. She is a past recipient of grants from the Puffin Foundation, the Pennsylvania Council on the Arts, the Artist-Investigator Project of the Triangle Arts Lab, and the Small Plates Imprint program from the San Francisco Center for the Book. Her artworks are in various collections, including Yale University (New Haven, CT), the National Museum of Women in the Arts (Washington, DC), and the Mediatheque Andre Malraux (Strasbourg, France). Wilson currently teaches printmaking at San Jose State University and Stanford University.

Anne Beck works collaboratively & independently in a variety of media from painting to print & book making to public intervention. Broadly, she is exploring the roles of amateur naturalist and lay surveyor of the current landscape–collecting specimens & recording data, cataloguing that which seems useful, and investigating further that which seems impermeable. This is all in the context of envisioning a sustainable path forward for herself and the planet, which is often a playful exercise in the face of absurd & complex circumstance. Anne’s work has been featured in In the Make, Studio Visits with West Coast Artists, Works & Days Quarterly, Hyperallergic, and Dublin’s The Visual Artists News Sheet. She has received residency awards from the Virginia Center of Creative Arts, Can Serrat in El Bruc, Spain, Oberpfälzer Künstlerhaus in Schwandorf, Germany, and was Barstow Artist-in-Residence at Central Michigan University. Anne is a 2015 recipient of the Fath Scholarship for Artists and Artisans of the Book from the Rare Book School in Charlottesville, Virginia, and a project grant from the Foundation for Contemporary Arts. Anne lives & works in Northern California.