Thanks to a 2019 Marriott Foundation donation, the Language, Literature, Architecture, and Fine Arts books that filled the north end of Marriott Library’s Level 2 were moved to compact shelving on Level 1, and the static book shelves were cleared away. In spring 2020, around 16,000 square feet of newly open floor space was turned over for the development of ProtoSpace.

Then COVID-19 struck and everything was put on pause when the Library closed to the public (and most staff), while the future ProtoSpace temporarily became a Personal Protective Equipment (PPE) manufacturing and assembly workshop.

During that work-from-home first year of the COVID pandemic, the Creativity & Innovation Services staff met virtually through Oculus Quest headsets. In between experimenting with virtual teaching and meeting productivity spaces, and the occasional game of laser tag, our team also created a scale model of our new home. After using three different drawing applications, and trying out many configurations of work zones, furniture, and equipment, we had a solid design for the space. That initial layout was realized in August 2021, when we began working onsite again, just in time for the semester to start.

ProtoSpace has enabled these units to flourish and grow, each adding new resources and services, while also increasing the number of users and our impacts on campus. These are some highlights:

In 2019, Marriott Library operated 10 (ten) 3D printers. ProtoSpace has allowed us to expand that number to 40 printers in three sizes. Half of those printers are available for public use, where UofU community members provide their own filament and manage the entire 3D printing process. The other 20 printers are part of an automated, for-a-fee printing service, allowing off-site users to upload 3D files online and have the finished print delivered to them. In the past year (since August 2021) alone, all those 3D printers have run for a cumulative 14 years, 2 months, and 12 days(!) of continuous work, generating approximately 8,700 print jobs. In addition, we now have a dedicated 3D scanning station. It still requires users to request initial training and assistance, but is now more accessible than before. 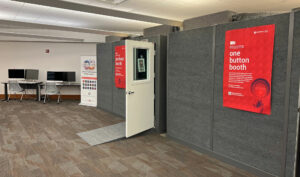 Prior to the COVID-19 pandemic, the demand on our three media recording studios had nearly reached capacity. In particular, the self-scheduled, semi-automated One Button Studio was in frequent use by students and faculty who were recording flipped-classroom lessons, social work and therapy practice sessions, theater and film auditions, and much more. So, we secured Student Computing Fee funding to purchase and equip two prefabricated recording booths. One has the same video recording functionality as the One Button Studio, and is ideally suited for presenters in a wheelchair or seated position. And, after examining the reservations data for the original One Button Studio, and discovering that many of the reservations were for podcasts, we equipped the second booth specifically for podcasting, increasing our capacity for audio-only recording sessions.

Prior to 2019, Marriott Library’s VR unit was limited to a handful of tethered headsets and infrared light towers, which needed to be set up each time they were used and put away again after because they did not have a permanent location in which to reside. Now, the VR arena in ProtoSpace has 10 tethered Valve Index headsets and high-speed graphics PCs permanently deployed around a 1250-square foot workspace. And the open interior of the VR arena allows users wearing one of our 50 untethered Meta Quest 2 headsets to occupy room-scale virtual environments, rather than limiting their physical motions to a 6’-by-6’ square.

Four of the VR work stations are accompanied by alternative VR controllers: 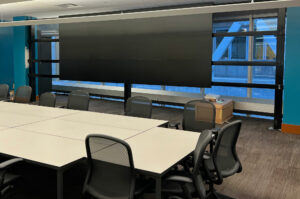 Beginning in Fall 2019, Marriott Library employees began exploring the possibility of installing a data visualization wall. After nearly two years of research, demonstrations, planning, and fund-raising, ProtoSpace 2751 was selected as the location for this complex, high-resolution research and teaching tool. Physical site upgrades began in spring 2022 and in late summer, a 9’ x 26’ steel superstructure was installed to hold the entire display wall. Last week, twelve (12) 55” LCD display monitors, each with 1920 x 1080 resolution, were mounted to that support structure in a 3-row by 4-column configuration. Throughout September and October, the processor, AV peripherals, computers, and controllers will be installed, programmed, and calibrated. We anticipate the data visualization wall will be fully commissioned by Fall Break 2022.

In addition to the Data Visualization Wall, last fall we also added 8 high-performance PCs designed with computational analysis in mind. They support a wide variety of GIS and data visualization software programs and are available to the UofU community whenever the suite is open.

The vinyl cutter is available for walk-up use in ProtoSpace, and we have covered two large tables with thousands of Lego bricks for prototyping and ideation. But now that we have a large open space, some exciting additions to our small-scale fabrication options are on the horizon. Keep an eye out for sewing machines and a laser cutter!

As we’d envisioned it, ProtoSpace is a natural extension of Marriott Library’s original and enduring mission. It encourages and enables cross-disciplinary research and learning in an unrestricted environment open to all members of the University community. And, because our resources and services require hands-on use, we are a draw for physical visitors to Marriott Library, which is no longer a given now that online resources (such as e-books, databases, streaming media, and document delivery) make it possible to “visit” the Library remotely. Our team will be writing in more detail about the development of ProtoSpace resources and services, as well as upcoming events, throughout the fall 2022 semester. We look forward to seeing you there!